What is Postpartum Depression (PPD)? 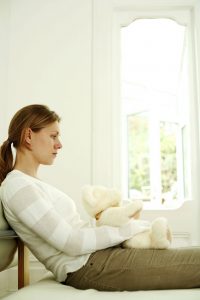 Postpartum depression (PPD) also called Postnatal Depression (PND) is when a woman experiences depression between one month and up to one year after the birth of a baby. PPD affects up to one in seven women (almost 16 per cent) giving birth in Australia. Sometimes it can be hard to tell the difference between clinical depression and the normal stress and exhaustion of new parenthood, but if your depressed mood is so strong you are unable to do your daily tasks then you could have PPD symptoms. According to the American Psychiatric Association, PPD can begin in the weeks after pregnancy or even before. (About half of women with PPD have symptoms during pregnancy.) The severity of depression after childbirth varies from mild to severe. There is a big difference between baby blues and PPD. Up to 80 per cent of women experience the baby blues in the early days after the birth due to changes in hormone levels. Baby blues include mood swings, anxiety, sadness, crying and last only a few days to a week or two after your baby is born. PPD lasts longer and is more intense.

What are the PPD Symptoms?

To be diagnosed with PPD you must meet the criteria for the following (with an onset in pregnancy or within 4 weeks of delivery).

Five or more of the following (including at least one of depressed mood and loss of interest or pleasure) in the same 2-week period. Each of these symptoms represents a change from previous functioning, and needs to be present nearly every day:

Why does it occur?

It is difficult to definitively pinpoint the cause of PPD, however, there are many factors that may contribute to its development. Possible factors include;

Overall the current thinking is that depression is a combination of genetics and environment.

What about the Dads?

Most people are surprised to know that around 1 in 20 men experience depression during their partner’s pregnancy (antenatal) and up to 1 in 10 new dads struggle with depression following the birth of their baby (PPD). Life changes in many ways after having a child and sometimes it can be hard to adjust to these changes, particularly when sleep deprived. Like any adjustment, it is important for a new or expecting dad to seek support and treatment as early as possible.

What treatments are available?

Cognitive-behavioral therapy (CBT) and Behavioural Activation can help alter patterns of thinking, and change the way people feel and behave. Acceptance and Commitment Therapy on the other hand may help individuals manage (rather than try to change) the difficulties they experience while developing new life goals. These are well validated, widely used therapies that can target depressive issues in different ways.